ProMat is in Chicago, home of… well, lots of stuff.

When it comes to trips, I kind of have this weird planning/go with the flow paradox that exists. I research the crap out of the city, and then just kind of have a list of stuff to do. Then it can just happen as it happens. It works for me, but y’all might as well benefit from the research I’ve been doing. Because Chicago is cool.

It’s a big city, actually the third most populous in the US. The City of Chicago itself has 2.7+ million residents, but the whole area, known as Chicagoland, has about 10 million. The name Chicago derives from a gallicization of the Native American (Miami-Illinois language) word shikaakwa.

Sports are a big thing here, but so many teams, so little time. Rapid fire, go!

Baseball – Chicago Cubs at Wrigley and the White Sox.

Basketball – Chicago Bulls (I’ll be honest, I only know Michael Jordan, who grew up in Wilmington, NC, a hop, skip, and a jump from MHI HQ).

And of course, my two favorites, hockey and soccer, also have great teams in Chicago, the Blackhawks and Chicago Fire SC, respectively.

And the landmarks! (Special shout out to Wikipedia on this section.) Many of these are just up the road from McCormick Place, so they should be pretty easy to hit between collecting cool solutions at ProMat!

Millennium Park – Because the park sits atop a parking garage and the commuter rail Millennium Station, it is considered the world’s largest rooftop garden. It is also home to Cloud Gate, which for some reason is known as The Bean in my head. I’m not sure where that came from. Cultural knowledge? But either way, it’s a pretty famous landmark. You know I’m going to try and sneak away to get a tourist photo. As much as I love doing cities like a local, you have to take the opportunity to experience the touristy stuff. It’s popular for a reason – it’s cool!

Magnificent Mile – i.e. fancy shopping (I have already been informed that I will have no shopping buddy from my team on this trip. Thanks for that guys. You’re the best.) You’ve got the big department stores like Bloomingdale’s, Neiman Marcus, and Saks Fifth Avenue along with the luxury boutiques like Cartier, Gucci, Louis Vuitton, and Prada. I probably will not be spending money there seeing as I don’t even own a couch yet.

But it’s there if you want to check it out. Many of these stores only have a few US locations, so you definitely stop by while you’re in town. The Burberry US flagship store is here, but there’s also home to a good ol’ H&M if that’s more your speed.

It also has some massive, massive malls: Water Tower Place, The Shops at North Bridge, and 900 North Michigan Shops. We’re talking multiple floors and even museums. Also check out the Drake Hotel for some sweet historic architecture. Fun fact, rent on the Miracle Mile is the third most expensive in the country, following Fifth Avenue and Rodeo Drive.

Art Institute of Chicago – As one of the oldest and largest museums (second in square footage only to MOMA) in the US, this place has some pretty famous works, including Grant Wood’s American Gothic. The lion statues out front are definitely worth a, dare I say it, selfie. *shudders* I know I’m a Millennial, but I’m not a fan of selfies. I’m more of a tastefully framed landscape phone camera shot myself. 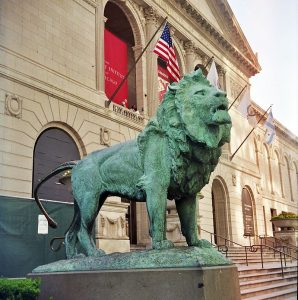 Sears Tower – Actually now called Willis Tower, it is the second tallest building in the Western Hemisphere (One World Trade Center beats it out), and the building has its own zip code (60606 if you were curious).

Navy Pier – This is Chicago’s number one tourist attraction and is a giant, well, pier, complete with fair/amusement park style attractions and eats. 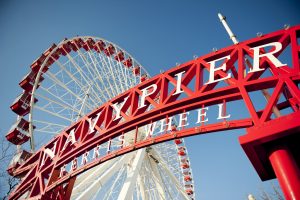 Besides stuff to do and see, there is also the opportunity to stuff your face. Ah beautiful food. Not gonna lie, this is a large part of why I’m excited for this trip. The city is home to many ethnic neighborhoods that produce their own food, so you should definitely hop around and sample, but there are some foods of Chicago fame that you have to try out.

Chicago-style/deep-dish pizza – Said to originate in Pizzeria Uno, this famous pizza is on my personal list and you know I’m going to try and find a way to get a slice (or who am I kidding, a whole pie).

Chicago-style hot dog – Hot dog topped with relish, mustard, sport peppers (chili peppers for the rest of us), tomato wedges, and a dill pickle spear. I don’t think I could handle it. How are you supposed to get all of that in one bite?!?!

On the other hand, Chicago also has two of the world’s most decorated restaurants that have 3 Michelin Stars – Alinea and Grace. The food sounds awesome, but I think you can tell by “the food sounds awesome” that I might be a little too small town to be comfortable at either.

Okay, I gotta cut myself off. So much stuff! But to learn more and really dig in, including getting itineraries for different kinds of trips, you can check out choosechicago.com, which has it’s own special ProMat 2017 section at http://www.choosechicago.com/promat2017.