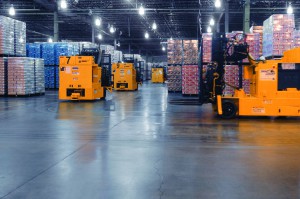 Although automation and use of robots to improve efficiency, productivity and employee safety are the norm throughout the manufacturing industry, the warehouse and distribution industry has been slower to adopt automation technology. While the same benefits of automation apply, barriers such as cost justification, flexibility of systems and lack of awareness of emerging technologies are reasons for continued reliance on manual operations.

Interest in automation is increasing, however, says Bob Hoffman, director of sales support and strategy for MHI member Grenzebach. “The ProMat show this year had a higher percentage of serious customers,” he explains. “I think there may be a growth of investable income within the industry, and people see the opportunity to prepare for the years to come.”

Another reason for the increased interest is awareness of the value automation adds to a distribution center or warehouse operation, says Tom Kaminski, chief executive officer of MHI member Egemin Automation. Automation allows people to focus on more complex tasks versus repetitive tasks that can be handled by a robot. “In some situations, such as a cold storage warehouse where employees have limited time they can spend in a freezer, using a robot or automated guided vehicle (AGV) to handle tasks improves productivity because they are not required to leave the space as often for safety reasons,” he explains.

Acceptance of automation from top level management to front-line employees is also expanding due to the proliferation of technology in everyone’s day-to-day life, points out Kaminski. “Introduction of technology such as robots or mobile systems is easier because the concepts are familiar,” he says.

One benefit of technology that is often overlooked is the aging workforce, says Hoffman. By reducing the physical demands of the job, as well as the risk of injury, experienced employees can stay on the job longer and younger workers are more likely to consider working in a warehouse, he says.