Guidelines for the Assessment and Repair or Replacement of Damaged Rack – Version 2.0 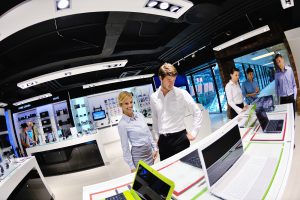 Consumer electronics used to be limited to radio and TV, but in a few short decades, it has expanded to include computers, tablets, phones—and yes, that refrigerator. At the Consumer Electronics Show earlier this year, attendees were able to see refrigerators that used a built-in camera to take pictures of its contents, or provided the capability to order groceries via an app connected to the fridge. Another manufacturer showcased a door that, when knocked on, became see-through— revealing the contents inside. Another included a door that opened automatically when people were sensed nearby.

As the connected home becomes more and more a reality, the concept of consumer electronics is expanding. But the overall sector is in a bit of a change.

Duncan Stewart, technology, media and telecommunications director of research at Deloitte Canada, keeps a keen eye on the shifts. “It isn’t well understood, but we have just finished an interesting period for devices,” he said. “In 2005, there were about 500 million consumer electronic devices shipped, between TV sets, PCs, smartphones and gaming consoles. In 2015, and now including the tablet, there were about 2.2 billion devices. That is pretty astonish­ing growth in a decade.”

But, he cautions, that 2.2 billion number will hold steady in 2016, with smartphones up a bit, consoles and TVs flat, and PC/tablet sales down.

“The material handling business did a great job of gearing up for 400 percent growth in a 10-year period,” Stewart said. “The new challenge is to adjust to a period of much slower growth, or perhaps even volume declines. At the same time, average selling prices are falling, which usually means lower mar­gins for many device manufacturers… and that likely means that they will be looking to their supply chain for sav­ings. They always have been interested in minimizing costs, but look for that focus to intensify.”