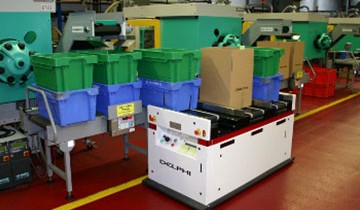 A recent Inc. article names the Automatic Guided Vehicle Industry as a best industry of 2014 citing the Industry’s recent growth. This growth is a result of the manufacturing recovery in the U.S., more specifically the automotive industry recovery. The article also attributes the growth to automation becoming more common in distribution facilities and warehouses where firms struggle to hire workers and look to lower operating costs.

“This was a record year for the AGVS industry,” says Sarah Carlson of Daifuku Webb and Spokesperson of the AGVS Industry Group. “In 2013, we saw a shift to more new systems in manufacturing and fewer vehicles per system. The economy is improving and more companies are looking to add automation to increase productivity and lower operating costs.”

Manufacturing operations continue to be the primary end use of AGVS. “Manufacturing accounted for 156 of the systems or 85% of all systems. That’s a 10 percentage point increase from just 2 years earlier,” added Carlson. Systems are on average somewhat smaller than just 2 years earlier. The average number of vehicles in a system in 2013 – 5.7 which is slightly more than 2012 and down from 7 in 2011.

“It is clear that based on these numbers that manufacturers of automation solutions, namely AGVs, are seeing a substantial interest in this technology and the many benefits companies can achieve through its use,” says Gary Forger, MHI’s AGVS Industry Group Managing Executive and Managing Director of Professional Development. “I believe this can be attributed not only to an increasing acceptance of this technology but also because of its proven efficiency and cost effectiveness.”

The AGVS Industry Group of MHI was formed in 1979. Members are the Industry’s leading suppliers of automatic guided vehicle systems. They supply systems worldwide and in virtually every major manufacturing and distribution sector. For more information, visit www.mhi.org/agvs.