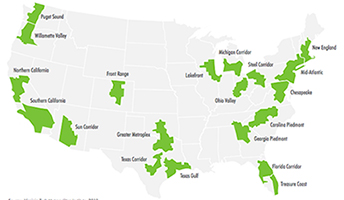 by Carol Miller, MHI VP of Marketing and Communications

As the globalization and complexity of supply chains advance, so must its optimization, especially for companies that process freight shipments between the U.S. and Asia.

This report makes it clear that to maximize supply chain efficiency, distribution center locations that are within close proximity to U.S. population clusters and multi-modal transportation are crucial. The report suggests that firms should first determine the optimal location based on their outbound requirement (buyers, people and retail locations) and then place their facilities as close as possible to transportation infrastructure based on their inbound requirements (cargo port, inland ports and rail).

Between 2005 and 2040, the U.S. population is expected to grow by 100 million people—60 million of which are expected to reside within 20 markets characterized as megapolitans. These megapolitan markets comprise cities and counties linked by shared transportation networks, labor markets and/or water supplies. These 20 megapolitan areas, which can be further combined into 10 clusters, are projected to house about two-thirds of the U.S. population by 2040 and will capture the lion’s share of total investment dollars spent on development and growth.

However, the additional volume moving through these megapolitan regions could result in increased congestion and loss of productivity. As such, the continued investment in transportation infrastructure is crucial.

Impact of Panama Canal Expansion
In order to capitalize on the greater container volume that will soon traverse the expanded Panama Canal, many seaports have recently invested millions in infrastructure, creating alternative transportation solutions including short haul rail and barge systems to accommodate post-Panamax ships. However, according to the report, the expansion of the Panama Canal is not expected to have a major impact in the movement of freight within the U.S., as separate strategies are required for high-value, time-sensitive freight (quicker delivery) and for low-value, low-cost freight (cost effective delivery).