Taking Sustainability Down the Supply Chain

Automation is an ever-increasing presence in the modern warehouse.  Tasks that were handled manually are now handled by interconnected systems of conveyors, robots, Automated Storage and Retrieval Systems (AS/RS) and Autonomous Guided Vehicles (AGVs).  Based on findings in the 2021 MHI Annual Industry Report, adoption of robotics and automation by supply chain enablers is expected to reach 76% within the next five years.  One of the key drivers of automation is the struggle to find and retain qualified workers at a rate that meets the need of increasing customer demands.

While different types of equipment perform unique tasks, the core of automated warehouse equipment is the electric motor which serves as the prime mover in the entire system.  If not properly installed or maintained, motors can fail resulting in significant downtime to critical pieces of equipment.

The study of how motors fail is not new science and the root causes have been well understood for decades.  A 1983 Electric Power Research Institute (EPRI) study, illustrated in Figure 1, found that motor failures could be attributed primarily to failures in the bearings (41%) and windings (37%). 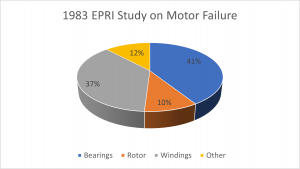 Bearing failures are caused by some form of short-term or long-term mechanical strain in the system.  Improper lubrication or contamination can impart destructive friction or corrosion of the bearings and other moving parts in the motor.  Installation factors such as misalignment of the motor shaft or improper mounting can lead to mechanical strain that creates uneven wear of bearings and other mechanical components resulting in significant reduction of motor life.

In the case of winding failure, it is ultimately an electrical issue, but it can be aggravated by mechanical issues as well.  Winding failure is a product of low electrical resistance (short circuit) which occurs when the insulation in the motor windings degrades to the point that the motor is no longer able to induce the magnetic field needed to spin the rotor.  Motor windings naturally degrade over time, but this can be accelerated by several electrical and environmental factors including poor power quality, inadequate overcurrent protection and high levels of heat in the system.  Additionally, the same mechanical issues that can reduce the life of motor bearings can reduce the life of motor windings as well.  Mechanical strain can result in the motor needing more energy which results in higher current draws.  Since this excess energy is not efficiently converted into motion, it is dissipated as heat which accelerates degradation of the motor windings and reduces the overall life of the motor. 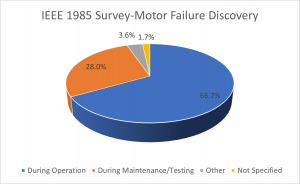 While methods for detecting motor failures have evolved since this study, most motors today are still ran to failure resulting in countless hours of lost productivity.

Fortunately, motors present warning signs before failure occurs.  Monitoring temperature and vibration in electromechanical systems provides valuable insight and can be used to predict failures. Sensors exist on the market that allow for this data to be captured.

As noted previously, mechanical strain of the motor or excess current draw in the windings can result in increased heat dissipation which temperature sensors can detect and when compared against normal ambient conditions can provide evidence of potential issues.  When this data is mapped over time, it lends some predictability to when a failure could occur.

In the case of motors that are improperly installed or maintained mechanically, they also dissipate the energy that is not efficiently used as vibrational energy.  Vibration sensors based on accelerometers can detect vibrational changes very quickly providing hundreds to thousands of samples per second.  In fact, the data provided by these sensors as a waveform is too complex to be deciphered easily by the human eye, so a common method for analyzing vibrational data is to use a Fast Fourier Transform to transform amplitude measurements of accelerometers over time (waveform) into a measurement of amplitude vs. frequency (spectrum).  Figure 3 (Source-Wikipedia) gives an example of how complex waveforms are transformed into easier to understand spectrums. 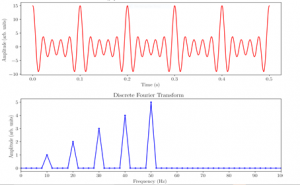 The spectrum can be monitored for abnormal variations versus normal system frequencies to detect when the system is experiencing some form of mechanical strain.

The Last Mile-Turning Data into Action

Automated warehouse machinery is not intrinsically designed to analyze data trends and facilitate predictive maintenance.  The machine can be designed intelligently enough to notify when a failure has occurred, but predictive models are based on human intelligence which can make prescriptive decisions based on probabilities rather than absolutes.

The key to enabling this type of decision-making is to ensure that the sensors that provide the data have connectivity into applications that can analyze the data.  This is where edge gateways play an important role.  Edge gateways serve as a critical bridge between automated machine networks and information-centric networks and can often be connected directly to the sensors using their native connectivity, or in the event that the sensor data is housed in the machine controller, they can extract the data using its native connectivity. From there, the edge gateway can add context to the data and prepare the data using standard formats for information applications (ex. JSON) and the standard protocols for these applications such as MQTT, OPC UA, etc.

The technology exists to mitigate failures in motors.  The key to successfully maximizing the life of motors and warehouse machinery means determining the best steps to connect the data to people who can act on it.

For more information, download the whitepaper – Why You Need Edge Analytics Today