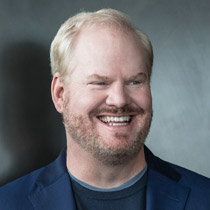 Join us for live music, food, drinks and entertainment by comedian Jim Gaffigan  at MHI Industry Night at MODEX 2018.

– Is the youngest of six siblings and wife Jeannie is one of nine siblings.
– Has said that he dislikes being labeled a ”Family friendly comedian”.
– Worked in Advertising before starting in stand-up.
– His comedy career began after a friend bet him to do stand-up comedy.
– Earned a B.A. from Georgetown University’s School of Business in 1988.

Jim Gaffigan is known around the world for his unique brand of humor which largely revolves around fatherhood and his observations on life and food. See a preview of Gaffigan’s humor through his hilarious appearance with late night host Conan O’Brien.

Tickets are sold for $50. Ticket price will include beer, wine and hors d’oeuvres. A portion of ticket sales will be donated to the Material Handling Education Foundation, Inc. (MHEFI).