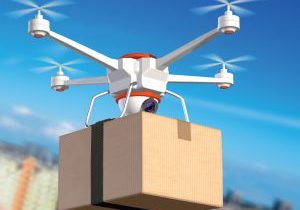 Walmart recently submitted a patent application for a drone delivery system that would drop packages into secure boxes (lockers) that communicate with the drone.

On May 25, the United States Patent and Trademark Office (USPTO) published the application, titled “Unmanned Aerial Delivery to Secure Location.” According to the patent, Walmart would use a blockchain not only to authenticate identity, but to also track other useful information about a package as it moves through the supply chain. For example, blockchain could track data such as time, location, temperature and other data in a tamper-resistant format that’s securely accessible to couriers, customers, and any other intermediaries along a package’s route.

“In some embodiments, the delivery may also include a delivery encryption system comprising a blockchain for package tracking and authentication. Package tracking by blockchain may include elements including but not limited to location, supply chain transition, authentication of the courier and customer, ambient temperature of the container, temperature of the product if available, acceptable thresholds for ambient temperature of the product, package contents placed in the container system (products & goods), or a combination thereof.”

Blockchain is a data structure that’s dispersed across a network of computers that some say is more secure than traditional means of record-keeping. Some firms see blockchain as a way to increase security and reduce fraud and inaccuracies in their supply chains.