Why Pallet Quality Is Key To Safe Rack Utilization

New Video on MHI View: How Close Are We to Drone Delivery?

What Will the Future be like with Driverless Vehicles?

On March 31st, 2016 Tesla Motors introduced the company’s first “affordable” electric-car model. The new Tesla Model S provides self-driving capabilities allowing the car to turn on autopilot and essentially drives itself through 12 ultra sonic sensors and radar. This technology automatically steers the car, switches lanes at the touch of the turn signal and adjusts speed according to traffic. The car will return under the driver’s control by touching the steering wheel or brakes. The Tesla Model S is just the beginning for what Tesla and companies like Google, Apple, Toyota, General Motors and Hyundai (to name a few) foresee for the future of driverless vehicles. Insider edition captures an older woman’s first experience with the new technology.

The U.S. Department of Transportation classifies autonomous vehicles on a scale of zero to four. Zero meaning no autonomous functions to four meaning no driver necessary. According to an article in the The New Yorker, Elon Musk, CEO and product architect of Tesla Motors states, “people should be able to summon their cars from across the country by the beginning of 2018.” Because of regulatory and technical reasons we may not reach total autonomy by 2018 but, it is predicted we come close to level 3 on the scale of autonomous vehicles in the next few years. How will this new wave of technology effect American society in a culture that is predominantly car dependent?

Dense City or Suburban Sprawl?
Imagine if you could take a nap, eat a meal or check email on your way to work. You might actually look forward to your time spent in the car. Driverless vehicles are predicted to transform society’s negative view on long commutes and encourage suburban living. Lloyd Alter, design editor of TreeHugger claims, “The driverless car is nothing more than a way to spread the suburban way of life even deeper into the countryside.” Does this mean city life will become less dense? The answer is most likely not. Car services like Uber and Lift have appealed to a growing popularity in personalized car sharing and has lessened the appeal of public transportation. This will continue as car services are predicted to be the first users of driverless vehicles before the general public. Lloyd Alter writes in How will the driverless cars effect the design on our cities, “While this sort of invention is a welcome addition and helps reduce the problem of one person driving alone in one car, it has the potential to lessen our belief in public transit as a public good as greater numbers of people turn to these customized solutions for getting to work.” With the new technology, competing car services will continue to populate our cities.

Driverless Vehicles and Travel
Driverless vehicles have the potential to reduce millions of deaths and countless injuries that take place on the world’s roads each year. Assuming we become a completely autonomous society, would the speed limit also increase along with safety? Mitch Turck, autonomous transportation journalist argues the opposite suggesting the speed limit will drop and autonomous vehicle traffic will be faster without increasing speed. His theory is by keeping a constant speed and decreasing the start and stop of traffic flow we will be able to reach point A to B faster without the need of heavy reinforced vehicles. Turck says, “Those vehicles would put much less strain on roadways, which means healthier roads, which means we could also more confidently design specialized high-speed vehicles for the 65mph+ situations.”

How Does Function Effect Design?
Just like the size and shape of the cell phone has morphed over time, the interior and exterior of the car must also. Today’s cars are designed around safety and navigation. Completely driverless vehicles will operate like a traveling vessel with no need for a steering wheel, brakes, mirrors, etc. for manual driving. The interior will function much like the passenger area of today’s limo only with much more revolution to the design.

Quoted from How Will the Interior of Driverless Cars Look? Experts Weigh In, Richard Bush from Car Keys explains, “Gone is the conventional forward-facing 2+3 seating position. In its place sits a much more open, living-room style layout,” Bush told us. The reason for this is simple, he says: “The two seats for the driver and passenger no longer need to stay glued to the windscreen, allowing them to swivel around and entertain their guests, friends, and children.” Below is The Mercedes F 015 concept car, one of the most popular examples of the modern layouts. 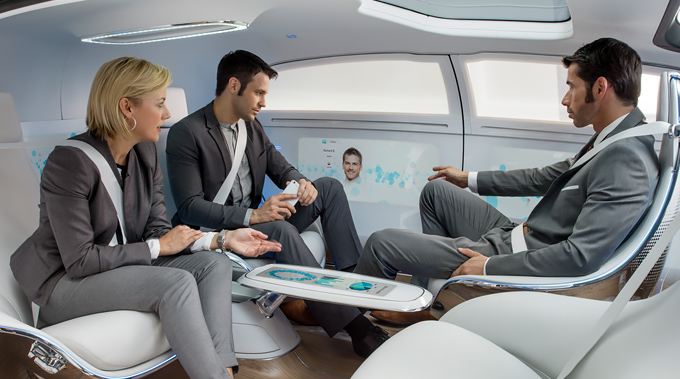 What do you hope to see from driverless vehicles and how could this effect your supply chain? Learn what technologies are truly shaking up the material handling and supply chain industry and how they will impact your business by reading the MHI 2016 Annual Industry Report.