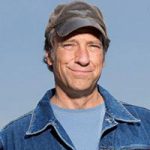 Mike Rowe is a TV host, writer, narrator, producer, actor and spokesman probably best known for his role on Dirty Jobs, a hit TV show on the Discovery Channel. Through this TV show Mike became known as “the dirtiest man on TV.” He traveled to all 50 states and completed 300 different jobs, transforming cable television into a landscape of swamps, sewers, ice roads, coal mines, oil derricks, crab boats, hillbillies, and lumberjack camps. For this, he has received both the credit and the blame.

Eventually, Mike was overcome with a desire to give something back. On Labor Day 2008, he launched mikeroweWORKS, a foundation designed to reinvigorate the skilled trades. He’s since written extensively about the country’s relationship with work, the widening skills gap, offshore manufacturing, infrastructure decline, currency devaluation and several other topics for which he has no actual credentials.

Mike’s message is simple, “Don’t follow your passion, bring it with you instead.” At MODEX 2018 Mike Rowe will give an illuminating account of the true nature of skilled labor, and why it’s being devalued by the media, advertising, and even the government. What lessons can we learn about teamwork, determination, efficiency and our definition of success? With conviction, humor and humanity, Mike Rowe will remind us of the enormous but forgotten benefits of hard, honest work and how it affects everything from our national identity to our infrastructure to the economy.

Learn more about Mr. Rowe and see preview below.