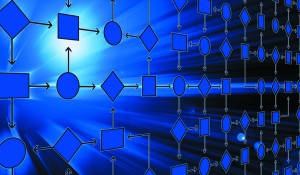 But before moving on to the latest in whiz-bang gadgetry, a stabilizing question: Just how “optimized” are your network and inventories first?

Everything previously mentioned—including inventory and network optimization tools—was on the list. These tools are now considered in the “maturing” category, with just under half of respondents having them in place. And in the days ahead, the report states, they will likely be more important than ever when it comes to remaining competitive.

“If I can knock down my transportation costs by 10 or 15 percent by reconfiguring my network or reallocating inventory to different distribution centers within that network, that’s a lot of money,” said John Hill, director for MHI member St. Onge Company. “Not only is it money, but the concomitant reduction of the amount of time it takes to get a product to the customer is money as well.”

Taking part in a recent panel discussion about the MHI Annual Industry Report, Hill heard another participant liken inventory and optimization tools to the accounting software QuickBooks, which has dramatically decreased in price over the years as technology has continued to advance. The speaker believed the same thing would happen with optimization within the next decade, as use of the tools becomes more commonplace.

Hill isn’t sure he completely agrees, but he has seen evidence of interest in the tools from not only large companies, but also smaller ones. Everyone still has an eye on the relentless demand for “better, faster, cheaper” delivery of customer orders, just as they did 40 years ago. And the tools make that idea increasingly tangible.