The “Dos And Don’ts” Of Rack Ownership

Warehouse Labor Productivity Is Declining – Blame It On Ecommerce

Productivity in the warehousing and storage industry dropped by 7.6 percent last year, according to a recent report from the Bureau of Labor Statistics (the statistical arm of the U.S. Department of Labor). Looking deeper into the numbers shows that the government’s calculation of warehouse labor productivity doesn’t necessarily provide an accurate picture of what is happening in the industry.

The apparent decline in productivity is a function of the increasing share of ecommerce orders flowing out of warehouses and DCs. These direct-to-consumer orders are generally more labor intensive to fill than others. And rising ecommerce orders are a driving force behind the increase in employment (and hours worked) in the industry. 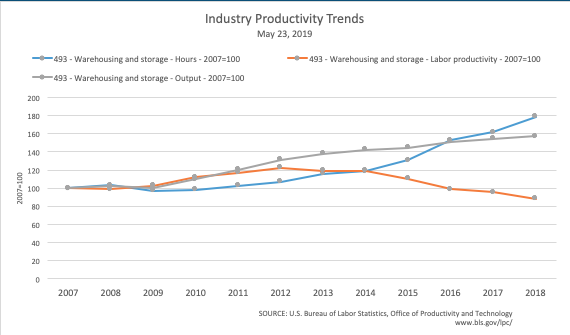 There is every reason to expect that DC employment will to continue to grow in step with ecommerce. So unless BLS changes how it calculates productivity, they may continue to report falling warehouse labor productivity for years to come, despite investments in new warehouse productivity technologies.

(For additional background on what industries are included in the BLS figures, see the note at the end of this blog.)

Anyone involved in distribution understands that it takes more labor to pick and ship 25 pieces for individual consumers than it does to pick one case of 25 for a single store. As ecommerce grows as a percent of total retail sales, each picking is increasing as a percent of DC activity. The net effect is that the number of labor hours required to ship the same unit of goods is rising. In effect, labor hours are growing faster than output. That’s exactly how BLS measures productivity.

Technology To The Rescue

In contrast to the BLS figures, warehouse productivity measured in lines picked and shipped per hour is steadily rising. DCs are adapting their processes and adopting technologies to boost piece-picking rates and throughput. Over the past decade, DCs have increased their investments in proven productivity tools like voice picking and slotting, among others. According to last year’s WERC DC Measures Survey, for example, voice picking usage has nearly doubled over the past decade, to 25 percent of DCs.

Warehouses and DCs are also starting to benefit from a raft of newer technologies, including automated mobile robots (AMRs). Although robots get much of the attention, there are also a range of new digital automation solutions that address productivity issues head on. These digital automation tools include AI (artificial intelligence), Machine Learning, and other math-based work optimization engines and planning tools that improve warehouse labor productivity without the need for new hardware or physical infrastructure. (For more on how these robotic and digital tools address productivity challenges, tune in for the Lucas webinar on June 18th).

Robots and digital automation technologies will dramatically increase labor productivity over the next decade. But they will not be enough to fully counter the growing demand for workers to pick, pack and ship ecommerce orders.

Labor Needs Will Continue To Grow, Despite Automation

The growth in ecommerce sales is driving a 10 percent annual increase in demand for warehouse labor – this increase is consistent with the BLS statistics. Since 2013, U.S. ecommerce sales have grown from 5.8 percent of total retail sales to 10.2 percent in the first quarter of 2019. By 2021 ecommerce is expected to account for 13.7 percent of sales. At that level, the industry will need 20 percent more workers than it employs today.

On the other side of the ledger, some people believe that technology will rapidly eliminate DC work. Technology analyst firm Gartner has predicted that one in ten warehouse jobs will be replaced by AMRs by 2021. Given continued ecom-driven labor demand, however, automation will only provide a brake on employment growth. In the end, warehouse and DC operators will continue to face challenges hiring and retaining staff. The industry as a whole will continue to add jobs at a steady clip, even as companies adopt technology to make every worker, supervisor and manager more productive.

This blog was originally posted at https://www.lucasware.com/warehouse-labor-productivity-is-declining/