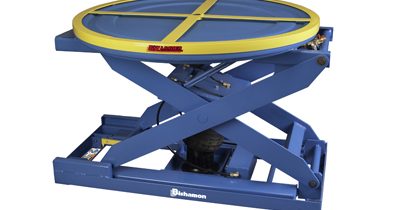 SOLUTIONS SPOTLIGHT: Leveraging the Versatility of the Industrial Scissors Lift

There are many reasons why MHI members should consider leveraging the versatility and convenience of industrial scissors lifts offered by member companies of the Lift Manufacturers Industry Group.

“Scissors lifts are used in applications that are much more diverse than most think,” said James Johnston, director of engineering at MHI member Autoquip Corp. and chair of the LIFT group. “Obviously, you think of these lifts in manufacturing settings and you think of them used for ergonomic reasons, but scissors lifts have a variety of applications.”

Scissors lifts can have high capacities, Johnston said. Along with tilters and turntables, Autoquip has designs up to 150,000 pounds.

“Scissors lifts are widely used as moveable work platforms,” he said. “With integration of controls and safety devices, designs raise and move in and around the item being worked on, such as a jet engine, fuselage or tractor. These lifts provide greater safety and higher productivity than using ladders or fixed platforms.”

Scissors lifts are also used in high travel applications, such as a fireworks launching platform for an amusement park—such a lift raises 50 feet into the air, Johnston said.

“Scissors lifts can be as large as required,” he said. “They can be mobile, integrated and customized to meet the exact requirements of the user.”

Moreover, scissors lifts are not just standalone products, Johnston said. With complex controls, scissors lifts can be integrated into a distribution system or manufacturing operation. Just as their lifts are customized for specific applications, control panels and interfaces can be customized to conform to the requirements and specifically meet the needs of the project.

“While historically many scissors lifts have been used for ergonomic reasons, we find today’s customers have specialized applications requiring custom solutions,” he said.

Jim Galante, director of business development for MHI member Southworth Products Corp. and a LIFT member, said that industrial scissors lifts are used in a wide variety of applications and industries to position material or to safely position people.